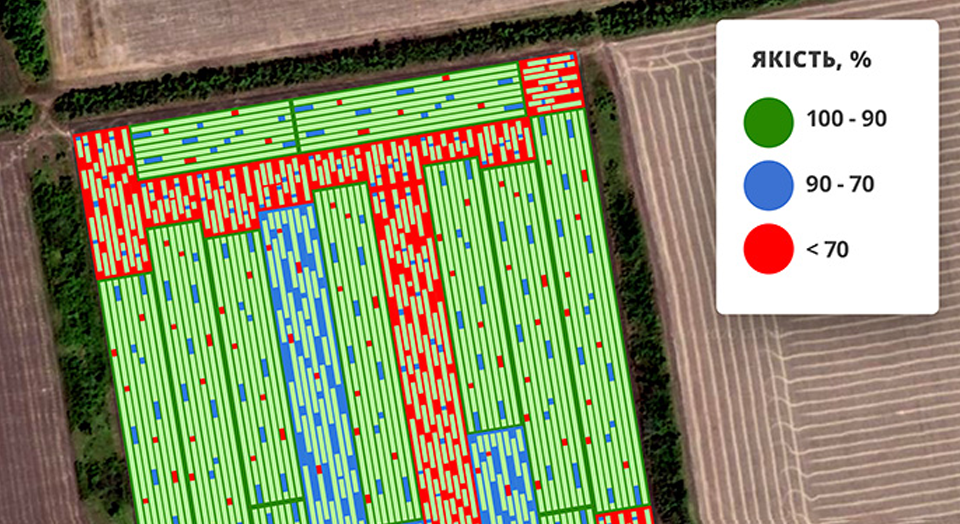 Operational monitoring of sowing operations helps to detect and eliminate problems during sowing in time. But when the sowing campaign is over, it's time to take stock.

During work in the field, you can see the implementation of the plan for the farm, machine operators, equipment; the program tells you what you should pay attention to, who are not coping, and who is already close to completing the work. After sowing, the system generates a protocol of each work and a summary table of results for the entire enterprise, and also calculates the sown area. In addition, high-quality agricultural characteristics of crops are created to assess losses and expected yields. Thus, if during the sowing campaign you do not find any flaws in the work, then you can lose a significant share of the crop, and hence future profit.

Soft.Farm had two pilot seeding control projects this season. The results were different, and we would like to share them. The projects were launched together with our partners, which specializes in the development, production and installation of control systems for sowing and applying bulk and liquid fertilizers, namely with “Intris Trade” company and LLC NPF “Monada”. As a result, the Soft.Farm sowing operational monitoring module made it possible to monitor the movement of sowing equipment on the map, compare the set and actual sowing rates, and monitor the current sowing and fertilizer application - speed, quality, uniformity, sifting, doubles and passes. Changes in all indicators were displayed online, and most importantly - the system calculated the sown area, the time spent on work and the total amount of seed. For each project, a sowing cartogram was formed with problem areas and overall results, by opening which you can evaluate the quality of the work performed by the machine operator at the current time and earlier. If something went wrong, then the manager could quickly intervene in the course of work, using the information received.

In general, the projects were successful, but in the process of their implementation we encountered difficulties of far from technical nature. Any seeding control system, regardless of manufacturer, consists of a set of sensors for various purposes, a control unit and an interface for human-machine interaction. But in the vast majority of cases, it was the human factor that affected the results of the work. We observed staff negligence when using the system, when machine operators completely turned it off or simply ignored warning signals. Faced with the reluctance of its implementation, up to equipment damage by breaking sensors, intentionally introducing incorrect parameters during configuration, which entailed a distortion of data in the statistics. In any of these situations, the mechanists referred to the breakdown or inadequate operation of the device, although the real reasons lay in the reluctance to understand new technologies and outright sabotage. In this case, the farm suffers double losses - the useless costs of buying a control system that was not used, and direct crop losses from uncontrolled sowing.

To prevent such situations, the Soft.Farm system is the only one on the Ukrainian market that offers the use of the online monitoring function of seeding control. It allows you at any time to see from a tablet or office computer what is happening with the seeder, where it is located, how the system is configured and with what actual characteristics the sowing is in progress. During the implementation of the pilot projects, all deviations were identified, the web-service showed the problem on the screen, and also sent notifications by mobile phone or email to the responsible person interested in the results of the work. As a result, the top management of agricultural enterprises left only positive feedback on the introduction of seeding control systems and noted that the use of Ukrainian-made equipment has several advantages compared to foreign counterparts. We want to note that this innovative system will stop the theft of seeds, as GPS monitoring stopped fuel theft at one time and will make it possible to preserve the crop as much as possible.

As you can see, Soft.Farm is based on the real needs of those farmers who are looking for effective ways to optimize their farm. If you want to participate in a pilot project on the implementation of seeding control systems during the autumn sowing campaign, we are already accepting your applications.